I seriously just need to have a constant recorder recording our daily conversations because even when I share the zaniness, I doubt people really believe this $hit is real! For that matter, I’m also struck dumb by some of the commentary…especially that of Chick #3, the Livy Bug. This kid WILL say ANYTHING and I do mean – ANYTHING!

I sat blissfully sipping my coffee as the two chicks prepared their pancakes. Of course this means passing items instead of asking me. Suddenly I hear, “I’m part NINJAAA” as Chick #2 managed to skillfully save the centerpiece from the falling butter knife…

Normal conversations in our house are on a constant Shuffle mode. It’s like listening to a severely attention deficit child who randomly talks about whatever pops into his/her head. We’re talking about a test grade and POP! -now we’re talking about psychedelic mushroom trips and how bad drugs are for you. Go figure.

So after going from Ninjas to egg whites that taste like paper to Daz Games to Sims to Goat Simulators… we finally ended up at doing laundry – to which Chick #3 asks, “is the pee towel with all the other towels?” (We had a toilet malfunction and had to use a towel to help sop up excess water)

Hen: Why, yes it’s with the other towels.

Chick #3: Good and I blame my feces for that. (You read that right)

Hen: What? <shakes head> I have no words for you. <Turns to leave the room still shaking head>

Chick #3: Well, you always said that if you felt like you still need to go <pause> FLUSH!

I really have no words for her…

Reposted from The W(H)INE Monologue

Circa 1998
Palm Bay, Fl
A lesson learned the hard way – Don’t drink and dive. And if you do, get close enough to the pool so you clear the edge.
Nice visual, right? Let me tell ya about it.
I, by no means have ever claimed to walk with grace, fall with grace, or simply drink with grace. To clarify – I do drink with Grace but not gracefully. Basically, I’m a disaster waiting to happen and when you add a little liquor to that, it’s only a matter of time before the inevitable occurs and I make a total ass out of myself.
Hence – don’t drink and dive.
You see, a bunch of us were hanging out by the pool, hot tub, garage game room and just having a grand old time. I figured I’d stay put in one place so as not to make a spectacle of myself. So for the longest time, I stayed in the garage shooting pool – where it was safe and DRY. No way was I about to eat tile and play slip and slide through the house. Nope. Not me. You see, I accept my limits and walking while drinking is definitely very limited.
As the night went on, the crowd routinely migrated from here to there an back again but not me. I was blissfully content to sit atop a bar stool next to the pool table, bottle in hand. Then it happened. The cooler went dry and pretty much everyone had wandered back to the pool. Damn. That meant I had to forego my skid proof flooring and gingerly make my way through the deathtrap wet, tiled house to the overly crowded pool deck where there were beverages aplenty. I didn’t really like the idea of pulling a Risky Business through the house and I hated the idea of me being a human pinball even more but when the cooler runs dry, you go where there are refreshments. I’m not sure how long it actually took me to traverse through the house and onto the back patio but somehow I made it and without any damage. Whew. Feeling relieved, I grabbed another drink, found a spot to once again perch, and hoped I wouldn’t need to move again any time soon. That was not to be the case; however, because the already rawdy group was being egged on by my house party hostess in the hopes of instigating a game of pool volley ball. Next thing I know, there’s two highly inebriated teams floundering about, looking like breaching whales as they attempt to make contact with the ball. This one does a belly flop. That one gets hit in the face. Another one sucks in a mouthful of water. Oh, now he’s hanging over the side of the pool gagging. That’s just great! I hear our hostess yell, “Don’t you effing puke in the POOL, dumb ass!” I’m about to wet my pants from laughing when she asks me to get an overthrown ball. Still laughing, I manage to get the slippery devil and chuck it back in the pool. “Hey! Come join us. This loser’s about to hurl” she calls to me as she instructs the water sucking guy to get out of the pool. My belly is about to bust from laughing at the scene before me and I know I shouldn’t, but I stagger over to the pool anyway. Big mistake. You see, alcohol plays tricks…evil tricks…on your depth perception. You guessed it. Objects in mirror are closer than they appear and when you’re drinking, they are farther way than they appear. In my mind, I was on the edge. In reality, I was 1 foot back from where I should have been. Know what happens when you’re too far back for a dive? You have no dive curve and hit the bottom… face first.
What did I tell you about grace? I didn’t play tile slip and slide but I did end up with a pretty gnarly pool smashed mug and I’m happy the entire incident wasn’t any worse.

Moral of the Story: Don’t Drink and Dive

This picture always reminds me of just how goofy we are when we’re all together.  We each bring our own kind of humor to the table and yet we all share the same goofy gene. You know the one. The one that says you don’t care what other people think when you wear that neon pink squid hat. The same gene that also lets you break out in your own busta rhyme dance beat in the middle of the grocery aisle. Our moves might be different but we still get the laughs and nothing says family more than laughter and good times. 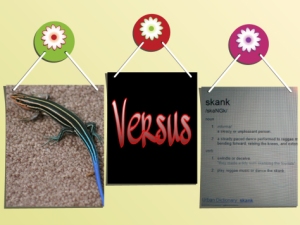 Reposted from The W(H)INE Monologue

Circa 2010
Let’s face it. The conversations in my house are anything but normal. When one of your children has been Blessed by both parents’ smart ass and witty nature, it is a true recipe for trouble against the younger siblings who aren’t nearly as quick witted or as linguistically clever as she. Normally, she and I are on the same team; but on occasion, she actually thinks she can out best me.

It was early spring and we had just moved from a crappy little apartment into a spacious house. Being that it was cool outside, the windows were open, along with the back sliding door and we were all piled into the kitchen, talking and laughing, while preparing dinner. Nothing unusual, right?
Next thing I remember is Liv pressed up against the screen door, yelling, “LOOK! LOOK! It’s one of those poisonous SKANKS!” While everyone roars with laughter and the girls rib shank each other for a better view of the slinking purple-y, black and blue ground dweller sunning on the back patio, I nonchalantly utter , “Liv, that’s a SKINK, not a skank” (pause – and under my breath) “Although I suppose it could be a skanky skink”. It’s at this point I realize the laughing has subsided into snickering and the culprits, Allie and Kass, are doing their own retile-y version of the skink, as they slowly back away from the question asker. I look up and shake my head at them because I know the inevitable is about to occur… and sure enough, as the child stands staring at the creature through the web messed screen, “Mom, what does skank mean?” Kass falls to the floor, doubled over and convulsing from a fit of laughter taking over her body. Allie, smart ass that she is, raises an eyebrow and smirkingly asks, “Yes, mom. What IS a skank?” As she seeks safety on the other side of the kitchen, I glare at her. Not missing a beat and certainly not wanting to ensure in a skanky skink conversation with the 10 year old, I provide a seemingly innocent textbook definition answer to the inquisitive child, “A skank is an unclean girl.” Whew! I signal my short lived triumph as I righteously stick my tongue out at my mini-me instigator. She’s still snickering. Kass is still rolling and Liv? Well, Liv turns to me, holding out her filthy clothing, and questions, “You mean like me?”

Moral: Never confuse a skink for a skank.

The yolks on you!

Follow Three White Chicks and a Hen on WordPress.com 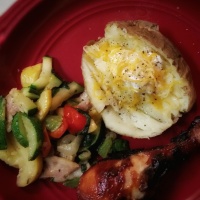 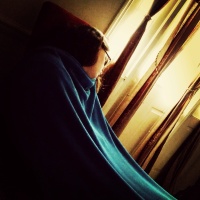 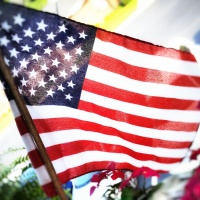